A Place Where Nothing Was 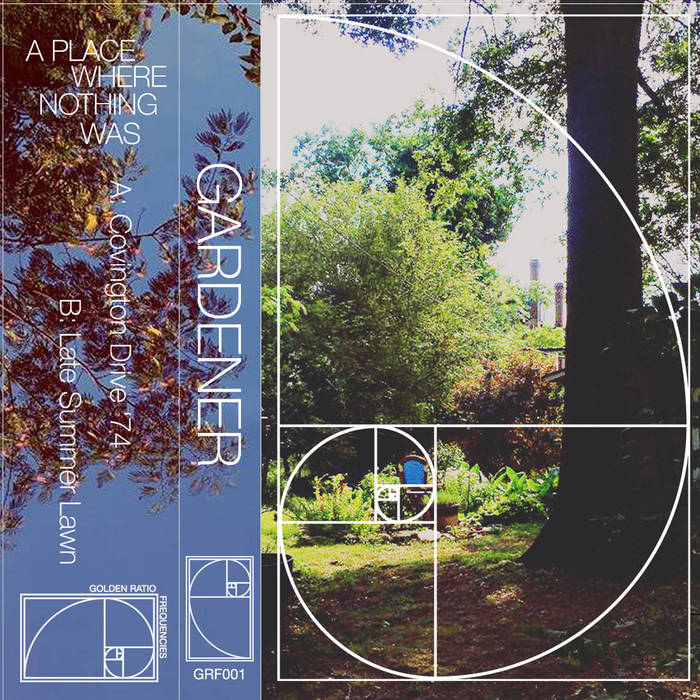 Levrikon Two slowly mutating blankets of sound. The tracks wash over you like cream, slowly enveloping you over the course of their run times. The changes are subtle so that by the time one piece ends you've forgotten how it even began. The soundtrack to dreams. Favorite track: Late Summer Lawn.

"...Building from a soft but incessant rhythmic knocking that eventually gives way to shimmering new age tones, the sumptuous beauty of where it ends up is made all the more rewarding by the path the music took you to get here."
The Wire

GOLDEN RATIO FREQUENCIES is very proud to launch with the label's first release GARDENER - A PLACE WHERE NOTHING WAS.

Having released a slew of trance like releases on such labels as Metaphysical Circuits, lillerne Tapes and most recently the excellent Moss Archive, A PLACE WHERE NOTHING WAS sees Dashiell continuing on his trajectory of reaching higher planes, with two side-long pieces of sublime heady work for Modular Synthesiser and Voice. Recorded in his Richmond, Virginia home, these two 15-minute tracks build, drone, pulse and morph into an organic miasma of heady loops, at once both alien and organic, machine yet human, fuzzing in a haze like fragments of fading memory and warm nostalgia.

In the Artist’s words:
“A Place Where Nothing Was” is my attempt at capturing the idea of place itself. The pieces were worked out during a strange, wonderful tour in July of 2016 that covered a lot of ground in a very short amount of time. One free morning in Ann Arbor, Michigan, I went for a walk in the neighbourhood in which we were all staying. It was a cool, still morning and no one else was out walking around, so I imagined what it would be like to grow up there, walking to Las Vegas Park or to the nature trail. I created an entire existence that didn’t really exist, planting my own experience upon a place to which I wasn’t tied at all. The idea of “a place where nothing was” means to speak to the vast potentialities in the world before us; one can read it as a complete sentence or a fragment of a longer statement. The songs themselves are meant to mirror both the ever-cascading complexities of experience as well as the, sometimes rare, moments of complete stillness."

Physical copies come on high-quality dubbed cassette with on-body print, housed in double-sided two-panel inlay containing pictures taken by Dashiell in and around his neighbourhood, and an acetate GOLDEN RATIO SPIRAL.

An accompanying video created by Visual Artist KHOM (IMPATV) for track “Late Summer Lawn” has been released, conveying a feeling of the wistful impermanence of our man-made suburban structures trapped in time and outliving their human creators, in contrast to the constancy of nature--the promise and perseverance of pulsing cycles of the plant kingdom surrounding and eventually enveloping any traces of our footprints left behind.
WATCH HERE
www.youtube.com/watch?v=mVChRsWaF34&feature=youtu.be

gardener - a place where nothing was
dash lewis + modular synth + electronics